Many of you are aware of Gartner’s Hype Cycle and its relevance to technology trends.  I’ve been speaking with analyst, researchers, and customers trying to understand where private cloud should be positioned.  After a lull in private cloud development in 2014, we’re seeing the potential beginnings of the “Slope of Enlightenment” for 2015.  For reference, see how the hype cycle generally works. 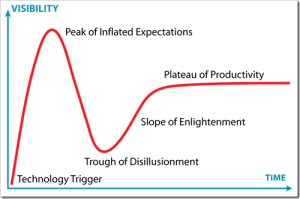 As time evolves, new technology ideas or products gain a lot of attention (hype) and enter what’s called the “Peak of Inflated Expectations”.  After the attention starts to wane, the new technology tends to get less visibility as companies start to examine how adoption will work for them; referred to as the “Trough of Disillusionment”.  As companies see competitors utilizing the new technology, increased adoption occurs and we enter into the “Slope of Enlightenment”. At some point, the technology becomes widely adopted and enters what is referred to as the “Plateau of Productivity”.